Yesterday I made a lemon curd because I had the intention to make macarons this morning. Even though I followed all the instructions of Food52 it turned out to be so liquid and not stiff. So this morning, instead of repeating the process “bowl over a simmering water”, i put it directly over the stove and it became so creamy.

I made my macarons, and surprise! They really were beyond my expectation. I made two trays, and I made the mistake to open the oven to switch their position and my macarons lost their puff.

But, my husband and I were satisfied by the final result.

Trust me it’s much easier to make them than to write about them! 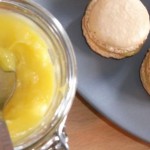 Good morning everybody! Yesterday I made a lemon curd because I had the intention to make macarons this morning. Even though I …

Hi, I am Dalia, the writer behind this blog. I am food fanatic, a chef and a wife. This is the special place where I celebrate my crazy life through a culinary journey.